Twitch is the most popular platform for live streaming in general. Although the platform started out live streaming video games, there are now streams ranging from board games to conversations to music, not to mention other obscure categories.

Right now, Twitch averages over 2 million viewers per day, and with such an impressive viewership, the live streaming platform is ripe for ad revenue. In 2019, Twitch was voted as the best video marketing and advertising platform by Digital Technology Awards which comes as no surprise to long-time users.

With several channels now placing their own advertisements, it seems as though anywhere you go on the site, you’ll run into advertisements. These advertisements can become quite intrusive as they can pop up in the middle of a stream, and ruin your experience.

For that reason, many people want to know the best ad-blockers available to improve stream watching experience.

What to Know About Ad-Blockers

Not each ad-blocker is created equally, and not all of them will work how you want it to on Twitch. As Twitch is aware many people use these tools, they had to find a way to fight back.

After all, advertisements are a large revenue source for both the company and the streamers, so the platform has to do all that it can to ensure viewers receive these ads.

If you’ve ever seen the famous purple screen on Twitch, you know why. Twitch has caught you using an ad-blocker when it attempted to play an advertisement, and it placed a purple screen to indicate it.

Many ad-blockers are created by small teams of developers. That means that they don’t have as much support and power to keep up with all the updates and changes Twitch puts out to fight off ad-blockers.

While having every single ad blocked would be ideal, it seems as though it’s impossible, so most Twitch users seem to be happy with what they get.

Overall, there are many adblocks that you can find by doing a quick Google search. However, most of them probably won't work, or they will make up for their services by stealing your data.

This is the list of the most reliable and useful adblocks you can find online.

Easy to Get and Easy to Use!

TTV AdEraser is a custom-built ad-block program made solely out of JavaScript, HTML, and CSS that is available on the Google Chrome Web Store. The extension and its code are available to be seen on Github. The project was created to remove all Livestream ads on Twitch by stream switching.

This stream switching method means the extension will switch from the original stream player to the embedded player stream that’s provided by Twitch. The same occurs when there is a purple screen. Once that screen is displayed the stream switches.

The project was developed and released in December of 2020. Since then, it has had various updates, but there have been none in the past few months. Nonetheless, TTV AdEraser remains a solid option for those who want a quick solution to blocking ads using a Chrome extension. 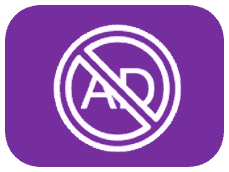 A recently created Twitch ad-block, Video Ad-Block for Twitch is an open-source project added to Github and the Google Chrome Web Store. The software uses a creative means to block advertisements. When an ad is shown on a Twitch stream, the software will recognize it and switch the video to an ad-free stream.

This ad-free stream will have a video quality anywhere between 1080p and 480p meaning your stream may temporarily have poor video quality. However, that’s a small price to pay for skipping advertisements and having a continuous stream.

The solution works locally, meaning there are no third-party websites or proxies used. It’s important to know, to use this extension, you have to first remove any user scripts or other specific Twitch ad-block extensions. The developers do claim that the extension works fine with uBlock Origin, another popular open-source extension.

The source code of Video Ad-Block for Twitch has been updated as recently as September 2021.

Most Popular Adblock You Can Find!

AdBlock is a popular, all-around ad-blocker available on the Google Chrome Web Store. The ad-blocker has over 60 million users and is one of the most popular extensions on the Chrome store. The extension is used to block ads on any website, including Twitch.

Beyond blocking ads, it also blocks third-party companies who track your internet history thereby protecting your internet privacy. Furthermore, the extension is customizable and may improve overall page load speed.

AdBlock is supported by a company, and therefore, it has a larger support team behind it available to make updates. This makes it a great option for those who want an ad-blocker that works for Twitch and all other websites.

You may be surprised to hear that you can block ads on Twitch without the need for an ad-blocker. If you use a high-quality VPN service, it’ll automatically block some of the ads on Twitch. However, this is also dependent on the quality of the VPN and the country where your IP address is being directed.

To ensure you use a good VPN, check out our guide about the best VPNs available.

We suggest using NordVPN if you want to block ads on twitch. NordVPN is a highly secure service with over 5000 servers. What’s more, when you use this service, you can select the country where you want to use an IP address—exactly what you want for Twitch.

Twitch allows people to pay for advertisements in various countries. That’s why in countries where Twitch streaming is well-known and widely used, there will be more ads. For example, if you access Twitch from countries like the US, UK, and Germany, you’re virtually guaranteed to see advertisements.

However, if you’re accessing Twitch from a country like Serbia or Colombia, you may well not experience any advertisements. Many Twitch users claim that accessing the site via an Eastern European country gives the best chance of viewing without ads.

Twitch looks as though it will dominate the live streaming market for years to come. It has a strong viewership that increases virtually every day. However, viewers will always be frustrated by the number of ads on the platform.

If you’re a viewer, whether you’re a long-term or new user, finding the right ad-blocker will greatly enhance your stream watching.

While we believe using a VPN is your best bet for the combination of all-around internet safety and ad-blocking, there are specific ad-blockers that you can download from the Chrome store that will do the job as well.